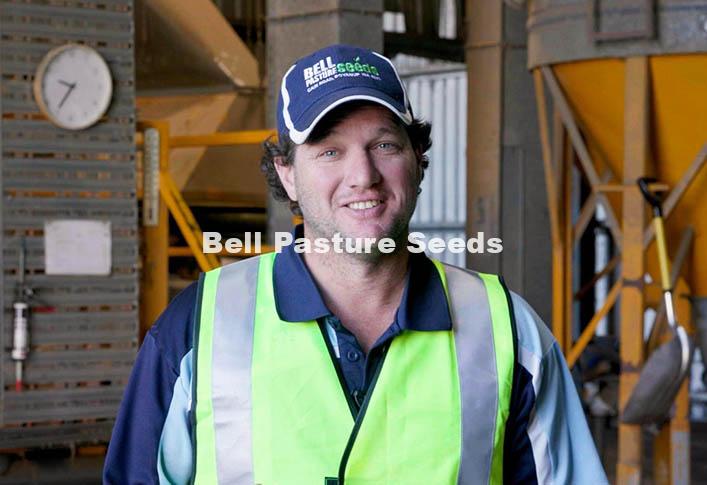 Rob is fourth generation on the Boyanup district mixed farming operation he runs together with wife Kellie and parents, Terry and Lynne, and is not shy of a challenge.

Having developed a successful small seed production business in addition to an intensive beef cattle program, the often waterlogged flat plains upon which the 1,000 hectare operation sits has been a constant obstacle.

However an innovation Rob discovered seven years ago whilst on a study tour in the US has remained front-of-mind as a solution to the property’s drainage issues.

“I spent a day working with drainage experts who had developed underground drainage across paddocks almost identical to ours – they were growing thumping ryegrass crops and 180 bushels to the acre of wheat on land that by right should be far too wet for those yields,” Rob said.

In 2020 the family invested in an on-farm drainage trial, whereby perforated plastic pipes – tile drains – were installed one to 1.2 metres below the soil surface to capture water.

“Rather than the paddocks getting waterlogged, the water drains through these pipes, leading to more oxygen in the soil, healthier crops with a deeper root system and more efficient nutrient usage,” he explained.

“We’re in a really sensitive environmental area with an abundance of sea life in such close proximity, so any water leaving the farm needs to be of quality.”

It’s a development that has piqued interest locally and nationally, and Rob was last year awarded a Nuffield Scholarship to further investigate water-storage infrastructure and subsurface drainage sites within Australia, New Zealand and the US.

Water Corporation WA is also looking on earnestly, the potential to capture and re-inject water savings back into the aquifer another potential, and previously unexplored, outcome.

With a 0.08ML per hectare saving recorded so far, Rob’s vision for the future is inspiring.

“Aquifers in this region are oversubscribed, we’re pulling faster than we’re re-charging and this gives us a really exciting opportunity to make positive contributions to the environment – and the fact that the water we’re capturing is of improved quality is terrific.”

Rob contracted sports oval specialists to undertake the earthworks – having seen the development phase in the US he knew exactly what to look for – and phase one of the new drainage system is now at work.

“If you went out into some of our paddocks during winter, you’d never come back,” Rob laughs, “but now our paddocks aren’t waterlogged, our crops are thriving and we’re using – not losing – our fertiliser.”

A traditional dairy farming region, the Bells are not afraid to pivot when required.

Honey is just another example of Rob’s entrepreneurial curiosity.

“We were paying someone to bring bees in, so I started with my own hive to see what it was all about and now we have 100 hives, a honey extraction facility and a wholesale business which, in its first 10 months, has sold 2.8 tonnes of honey.”

“I do have to thank my family for being supportive of every one of my whacky ideas,” Rob laughed. “I think everyone looked at me sideways when I suggested the seed production business idea.”

He was also grateful to his Rabobank manager, Martin Anderson of the Bunbury branch, for also indulging his more unusual proposals.

“Martin is exceptionally level headed, and he’s never once said that any of my ideas were too extreme, rather he suggests we sit down and do the figures – even though I’m sure he probably thinks I’m mad!”

However despite his jovial and laid back manner, none of Rob’s decisions are made on a whim, rather through thorough and extensive analysis facilitated largely by an independent advisory board.

“Our advisory board consists of the four family members, our accountant and farm adviser, and we meet every three months to set and assess goals and direction.”

“Each meeting we include a special guest, be it a lawyer, a specialist finance accountant or a similar professional, to come in with fresh eyes and help us set goals for the next 12 months, five years and 10 years.”

He said it often took someone from outside looking in to see the full potential of a business.

“You think you’re going well until someone comes in identifies opportunities or inefficiencies you’d never even considered.”

“We’re not afraid of consultants, advisers or outside opinions – we don’t take every piece of advice, but we make sure we listen to them all.”

Rob said the advisory board helped take the emotion out of executive decision making, and greatly eased significant processes such as succession planning.

“Nothing is written in stone, we include exit and entry strategies in our five year plans to allow for the reality of business and we are constantly re-assessing and communicating.”

The move to Rabobank just 12 months ago was further sage advice recommended by the board – the bank’s all-in-one account the best fit for the business’ cash flow.

“And as an ag-based business we were also impressed that Rabo’s grass roots aligned with our own, we consider our bank key in our planning and business and have full trust and assurance in our partnership with Martin.”

Always looking to do more with less, Rob is currently conducting a deep ripping trial to further improve production, and has literally paced out 40 hectares using radiometrics to identify soil type, and a pantometre to measure soil compaction.

“Unfortunately when it comes to deep ripping, many people don’t realise you can’t rip all soils – so this testing was to ensure I identified areas suitable to rip, and have found 250 hectares I think will respond well.”

“There’s a hard clay pan at 300 metres and underneath it’s as soft as butter, but a root system would have no chance of pushing through the pan.”

Conversely, he said ripping into soil with too much clay content could be extremely dangerous for soil, so it was imperative his ground-truthing was accurate.

Work ripping the soil will start in the next few weeks, further improving the operation’s production efficiency.

“Everything we do is about increasing our capacity and income, without necessarily increasing our scale, in this day and age it pays to work smarter, not harder – and thankfully a few of my hair brained ideas have turned out to be not so crazy after all,” Rob laughs.